How wrong can my power meter be?

How wrong can my power meter be and why? The key to training and improvement is to know your limits and train to beat them

The classic question above is often asked by cyclists once they work out that the 1 or 2% accuracy claim of most power meters is just a marketing term. Power meter users come to that point once they start analysing their own data. They soon notice that the power used for very familiar rides and efforts varies randomly.

In this article, we’ll look at an example where the numbers speak for themselves and then ask why errors might happen – and why the InfoCrank performs so reliably every time.

Our example is a classic steady ride for a recording system. What caused the power meter to ‘act up’? Was it the altitude or the change in temperature? We will never know. We can estimate by working back from the W1  Balance, that the power recorded is out by about 300% in the second part of the ride and also by a significant amount in the beginning. 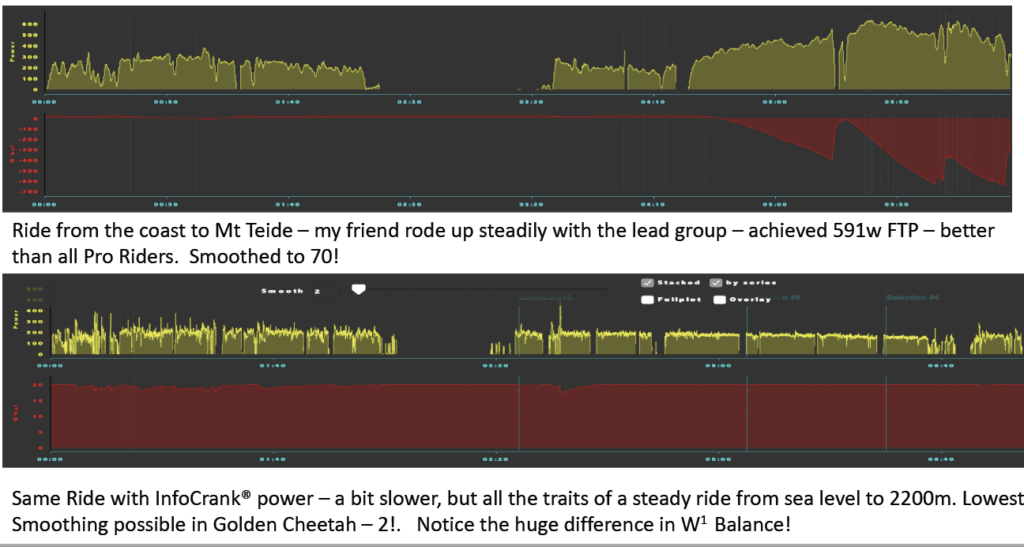 What is interesting about these problems of error is that the riders often don’t know when their power meters are out. It is only when they see results like the above that they then question all their data. It also tends to be when they swap over to InfoCrank, which this person did soon after…

My friend has given me access to his ongoing data, so I checked out the last three outdoor rides that he did as the lockdown period loosened, but this time with InfoCrank. All the rides were of course in the same locality, but they differed in length, weather, altitude gained and a myriad of other things that can easily hide wrong numbers.

However, in this simple case, there are clues to show that the InfoCrank readings are accurate for each ride. Effort can directly be compared – so let’s look at the table below.

For many riders, even over courses near their homes, it would be difficult to tell whether the recordings are valid or not. In this rider’s case, he can see that in these three rides outside over the last three weeks, he put in a strong ride over the different terrains and distances, but the pedalling effort was virtually the same. That is; torque averaging 23-24nm per pedal stroke for the entire time he was pedalling.

He can immediately see that the longer ride where he conserved energy just a little resulting in a lower average and normalised power was also because he was not pushing down on the pedals as hard – about 4% less pressure per pedal stroke.

The reality is that you need a host of accurate numbers starting with torque in order to prove up your numbers.

What you can see from above is that if any of the measurements are wrong, there is the potential for huge errors, well beyond 1 to 2% and you would never know. InfoCrank is the only device that accurately measures crank torque and also the peak of each crank rotation.  That leads to phenomenal accuracy and unchanging stability for each pedal stroke you take.

Notice in the chart below how the InfoCrank is measuring all parts of every pedal stroke for a six second period, right and left, the time and then able to plot the power for each crank from peak to peak as well as combined torque (black) and power (blue near the top).  For normal riding, these combined numbers are the ones that you see as well as the cadence.

An immense amount of analysis is able to be done and I have included some below: 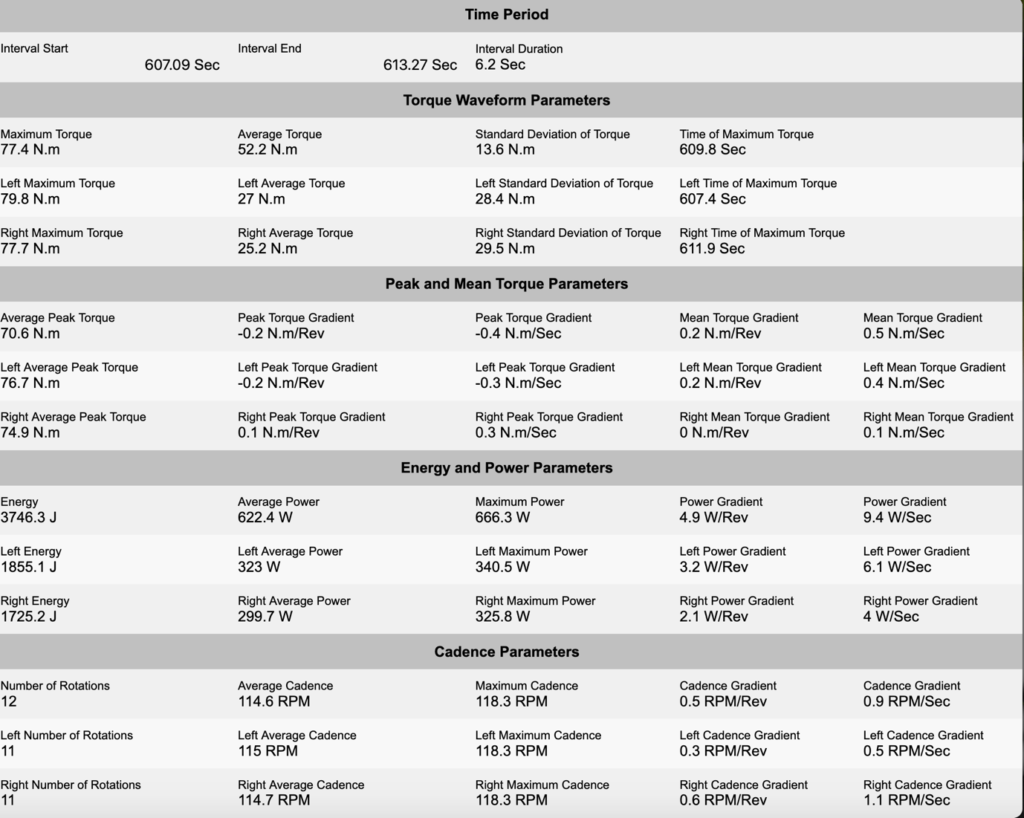 Have a look at the readout from an accelerometer below produced by the crank/bike movement on a regular surface. You can immediately see why the timing of each pedal stroke is impossible to measure accurately. 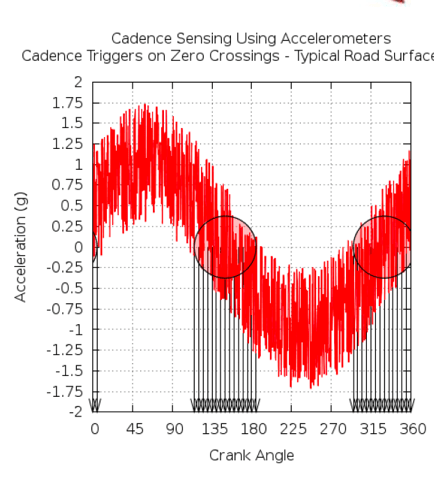 So now instead of accuracy to 1,000th of a second as with the InfoCrank, you have accuracy to +-80 deg of pedal rotation, assuming the road surface does not change.

This has large implications, because you don’t know if your recordings are accurate, unless you have the visible evidence that we all saw on Mount Teide at an early season training camp. Some people try to ‘smooth’ the numbers, but randomly bad numbers just produce randomly bad smoothing.

So, in fact, you cannot correct your false numbers, because you don’t know that they are false and by how much. Even if they average pretty right, it could still mean that virtually no measurements were correct, so the data has no value.

The key to training and improvement is to know your limits and train to beat them.  You cannot do that when the margin of error is so large.

The InfoCrank is the only cycling power meter that delivers accurate and repeatable data and lives up to the hype of true measurement.