The question of accuracy – revisited

When measuring anything, the key issue is whether the result is trustworthy. If you can trust your power meter, you can properly plan your training and genuinely target achievements at the level that you wish. Bryan Taylor, Verve CEO, shares his thoughts on accuracy and why it is important to all cyclists, not just the elite.

Whatever our level, we all have the same challenge. The most important thing that needs to be really correct on the bike is the two measurements of:

Combining those two measurements gives us a number which we call ‘watts’ or ‘power’. The watts will be accurate only if the other two are very accurate.

It’s basic maths – if you multiply then you accentuate the result, so if one or both of your measurements is wrong, then the multiplied result will be more wrong. Worse still, you probably won’t be able to tell how wrong it was in the first place.

At this point, I’m often asked if it really matters. People tell me they’re not a world champion so don’t need the same level of accuracy I don’t think that is right.

Let me explain from a recent ride. For this indoor season, I am going to ride on Zwift with my trainer power numbers showing and use my InfoCrank data just for myself.

I wanted to know just how accurate the trainer is – for my own satisfaction. Some weeks ago, I tested it and it did quite well, so I started my indoor season and did not really check the results.

However, being early Autumn and with some nice days, I could not help but notice that my numbers in Zwift events were quite low compared to my outdoor rides and I was getting more fatigued than I thought I ought to be.

I had some data logging work to do with our apps, so to kill two birds with one stone, I rode a one hour event yesterday with Zwift recording the trainer data and I was data logging the actual data from the InfoCrank. The data logger is recording 256 times each second from each crank and synchronising the independent data. This is super accurate and with lots of information.

My aim was to not go off too fast, settle into a nice group and go round at the top end of my lower lactate threshold (LLT). If I was to put in any effort, it would be the final sprint – the rest was to be steady.

The event worked out well and went to plan, it seemed. It was obvious there were very few ahead of us and I supposed many of those would be taken out of the placings due to being in the wrong category. To keep with the group, I had to ride at 182w average, which is at the higher level of the planned zone, but OK.

The final sprint came and I was able to ride within myself and ended with bronze in the middle of the sprint sandwich. The first placegetter finished a long way ahead and I had not wanted to go round at that pace.

However, I felt more tired than one ought to for an hour at 182w, so I was eager to do the analysis. Trainer vs true measurement – what would I find?

The data logging showed that the actual average power was 197.7watts and over 200w when normalised. Not only is that 8% greater than I thought I was riding at, but too much time was spent in a zone that I did not want to train in that day. Of course, I did not know that as I only got to see data from the trainer – not the real data. 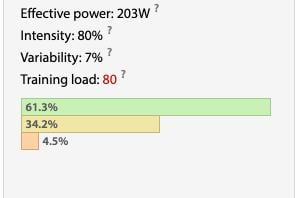 Worse still, the sprint according to the trainer, which I did in three parts had a maximum wattage that was 11% less than that recorded by data logger. Now that is a lot!

Nearly 80 watts error – are you kidding? Of what value is a number that is so inaccurate? The following day I was going to be doing sprint intervals on the road, so I did not want to tire myself. The trainer gave a maximum of 635w for the sprint – the reality was 711w.

I had another mark to compare. Last indoor season (March 2022) I rode a spin and sprint session on the same course and for the same distance over the hour. Sometimes when I ride this event, I do not sprint, but just use it as LLT training for my base load. On that day, I recorded my InfoCrank data which showed that my average power was 160w (164NP) – right in the zone in which I wished to ride.

See the chart below;
The key point is that I rode 90% in the zone I was targeting. The Zwift ‘speed’ was 35kph, but my bike computer does not measure distance or speed when on a trainer. 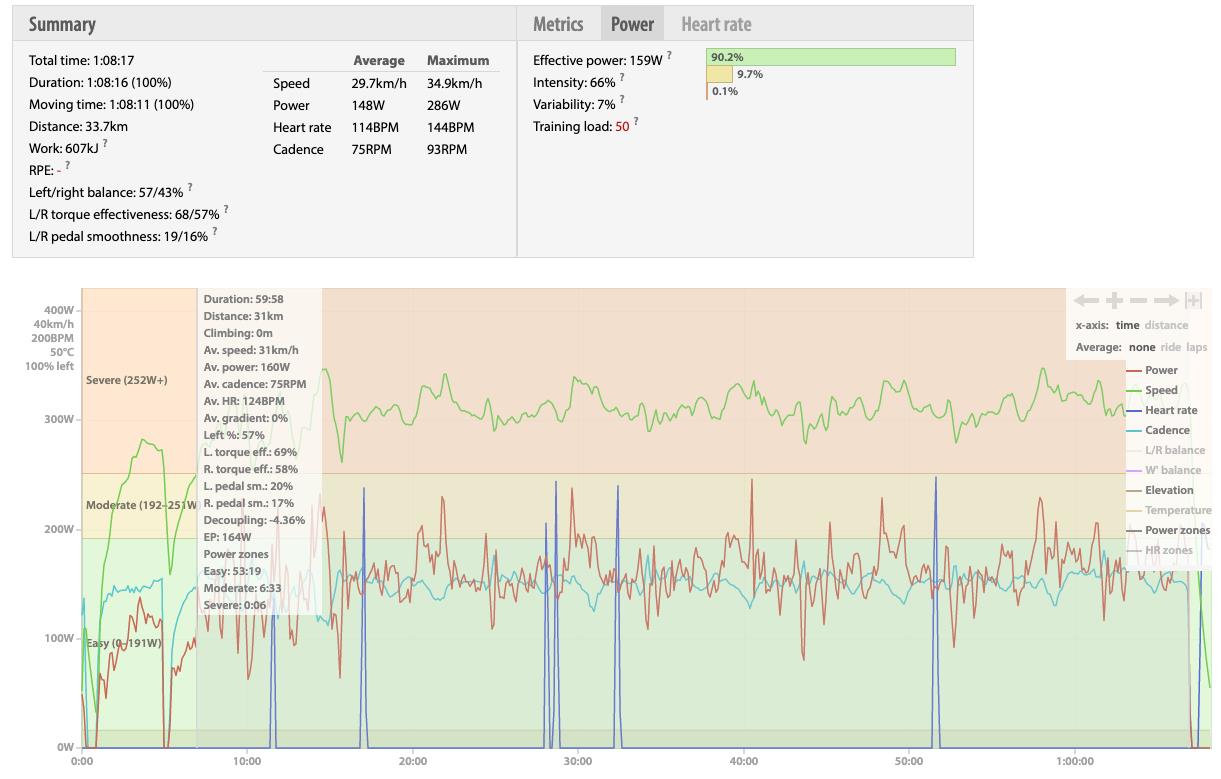 What is my point? If you want to train – not just ride – to improve or at least maintain skills, strength and fitness, then you have the do the right things at the right times. Accuracy of measurement is critical.

Maybe the solution is the new IC2 due for release this year. We will produce the data via BLE5. At least then I can ride in the zone that gives me the outcomes that I want to be able to hit on that first event of the year next April and make it to the top of the first hill with the key group and then hold on to the end – can I get a podium again ten years after my last one?